At a time when technical college enrollments are soaring, Governor Walker is proposing to slash Wisconsin Technical College System (WTCS) state funding by 30% and freeze the property tax levy at its current level.

The WTCS was established in the early 1970s with three equal sources of funding, one-third state aid, one-thrid property taxes, and one-third other sources.

This combination of declining state aid and increasing enrollment means that state aid per student has tanked, dropping from about $2,900 (in 2010 dollars) in 2001 to about $1,700 in 2010, a decline of more than 40 percent. As result, WTCS's students have the largest unmet financial need of all of Wisconsin's college students. 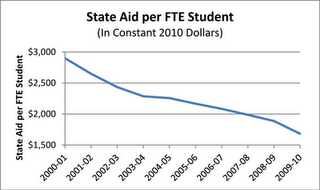 Since the early 1990's Wisconsin's business leaders have argued that the biggest obstacle to business expansion and economic growth was the state's shortage of skilled workers.  As recently as last week, Badger Meter, Inc. CEO Rich Meeusen, an avid Walker booster, acknowledged that having "a pool of talented employees" was more important to business expansion decisions than low tax rates.

Wisconsin's technical colleges have a stellar one hundred year track record of training the state's "pool of talented employees."

At a time when firms like Marinette Marine, Oshkosh Truck, Bucyrus Erie and their Wisconsin-based supplier chains are struggling to hire hundreds of skilled workers, cutting WTCS funding and the state's supply of skilled workers is the wrong thing to do. It will undermine the Wisconsin's fragile economic recovery, the prosperity of its citizens and businesses and Governor Walker's campaign promise to create 250,000 new jobs.

When the Committee on Joint Finance convenes on Thursday to discuss Walker's WTCS budget proposals it should restore the WTCS's state funding and remove the property tax levy cap.

The Wisconsin Budget Project analysis is linked here.
Posted by Michael Rosen at 6:20 AM

Factors that increase the return to capital are just about the only things that matter for private investment decisions. What increases returns to capital? Productivity-enhancing infrastructure, including physical, human and social.

Things like transportation infrastructure, vocational and technical education, and the regional agglomeration economies are the best ways to improve returns to capital.

These are all areas where Scott Walker has taken actions that directly contradict the best interests of the broader economy, including both labor and capital. Sure, he'll crow about tax rates and spending -- but exactly zero of that has any impact on economic growth, wealth-creation, and future prospects for our state and its people.

Education is crucial when it comes to economic recovery; not just for Wisconsin but for the nation. Education and a booming economy are linked and it's hard to have prosperity without educated citizens.