Adele and Miriam, a story of seeking asylum in the United States

The thousands of Latino refugees seeking asylum in the United
States reminded me of the story of an earlier generation of
refugees who also experienced family separation and extreme
hardship after being denied entry into the United States.

They were children, 10 and 9, from Zamosc, Poland when the
Germans invaded. Adele and Miriam hoped to escape Nazi
persecution and reunite with their parents who had immigrated to
the United States earlier, But they, and their three older siblings
, were denied entry by strict immigration rules. 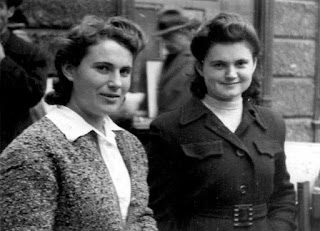 The Germans immediately began rounding up all the Jewish men
including Adele and Miriam’s teenage brothers. They were
stripped naked, ordered to dig their own graves, shot and
dumped in those graves.

Every few weeks there was another roundup. Trucks were
waiting, Jews were loaded and driven to the nearest forest.
Graves were ready and the killing commenced. Miriam recalled,
” It is impossible to describe our lives….”.

Adele, Miriam, Anna, their sister, and Anna’s child were
rounded-up along with hundreds of others. They were ordered
to take off their clothes. Hoping to avoid certain death, they ran,
eventually  seeking refuge in a deserted building. Adele and
Miriam climbed a ladder to safety.

It was very quiet. Suddenly, the stillness was broken by Anna’s
voice pleading for her baby. Two shots rang out. They would
never see Anna or her child again.

Adele and Miriam waited. It was silent again.  Thinking it was safe
they climbed down. But a collaborator must have heard them. He
entered the building. Aiming his rifle at the two frightened girls, he
ordered them out of the building where German soldiers were
Waiting. One of the soldiers looked at his watch, and said, “Let
them go. "Enough for today.”

A Christian family the girls had befriended hid them. Providing
them with one set of false identification papers, they urged them
to flee to Russia.“ Tomorrow is Sunday. Lots of people will be on
the road. Start walking and don’t look back.” 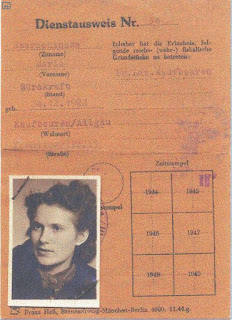 In the Ukraine Adele and Miriam found safety living and
working  under assumed Christian identities even after the
Germans invaded.

Following  the German defeat at Stalingrad In the winter 1943,
Adele and Miriam were separated and shipped out of Russia as
slave laborers.Miriam was sent to Italy where she worked as a
cleaning woman and later
in a hospital helping comfort the gravely wounded. The irony of a
Jewish girl comforting Nazi soldiers was not lost on her. Before
she was deported she had given  Adele her address.

Adele was eventually sent to Germany were she worked as a slave
Laborer in factories, offices and shops. The sisters wrote to each
other weekley. But only one of Adele’s postcards with a  return
address in Stuttgart got through. By then Miriam was working in a
hospital in Germany near Kaufbeuren.

Despite the Germans defeat, Miriam and the Russian women she
was with were treated like a slave by the German doctors and
nurses. They were given little food and three were forced to sleep
in a five by ten foot room. Miriam Complained. With the assistance
of a Jewish survivor working for the Americans was moved to a
better room in a convent.

Desperate to reunite with her sister, Miriam walked and hitched
hiked the 110 miles to Stuttgart joining tens of thousands of
refugees who crowded the roads much like the thousands of
Latin American refugees seeking refuge in  the US.

Once in Stuttgard Miriam walked the streets searching for her
Sister. When she noticed a handwritten menu with Adele’s
distinctive handwriting on a tavern door,. Miriam asked for
her”cousin” by her Christian name. The barmaid yelled
upstairs and in a few minutes the two sisters were hugging
in a tearful reunion. A few days later they returned to Miram’s
room in Kaufbeuren

Needing work, Adele went to the U.S. base where she met an
American GI, Robert Hillibrand. He recalled the meeting.” She
appeared...fearful as a mouse, tentatively looking in, wondering
whether she could advance another inch without being swatted
or crushed. She was like a line drawing of a person, an
amorphous being… She stood silently. She had learned that
you don’t speak without first being spoken to….That was a
ardinal principle of survival…””

Hilliard helped Adele secure a job on the base. Eventually Adele
introduced Hilliard to Miriam, “a slim young woman with
sparking dark eyes and a small round mouth, her face framed
by shining brown hair.” They told Hilliard that they were Jewish
and asked his help in reuniting with their parents in the United
States. It wasn’t easy, but eventually Hilliard reunited the two
girls with their parents in New York.

Adele married another survivor, Bernard Green. They settled in
Brooklyn and had one son, Howie. Miriam married my mother’s
youngest brother, Arnold. They had two daughters, Sylvia and
Karen. Adele and Miriam became Americans and lived quiet,
productive, lives of dignity. They rarely spoke of the terror they
had experienced.Nor did they harbor any resentment against
the country that had rejected them. But they never forgot.

Miriam died of cancer in 2004. Adele,92, died, two weeks ago
surrounded by her son and Miriam’s children. Their legacy
lives in every refugee who seeks safety and a better life; in
those who walked thousands of miles through Latin America
seeking safety and a better life in the United States; in the
children at the border who are have been cruelly separated
from their parents.Never forget. No Retreat. No Surrender.