Graduates of for-profits have higher default rates and lower earnings and employment than peers, study finds

Students attending for-profit colleges fare worse than similar students at community colleges and public and private nonprofit institutions, according to a new study reported on in the Chroncile of Higher Education.

Six years after they enter college, students from for-profit institutions are employed at lower rates and earn between $1800 and $2000 a year less than their peers.

The study is linked here.
Posted by Michael Rosen at 7:42 AM 1 comment:

MATC was front and center during President Obama's Master Lock visit. President Obama discussed the importance of two-year colleges, MATC students were in attendance, the Master Lock employee, DiAndre Jackson, who introduced the President is an MATC electrical apprentice and interim Technical and Applied Science Dean, Dorothy Walker, was interviewed following the speech.
Posted by Michael Rosen at 7:25 AM 1 comment:

Frontier job losses and the failure of business climate strategies

Frontier airlines became the third major employer in Milwaukee to announce major layoffs this week when it announced plans to layoff almost 450 employees. Earlier, C and D Technologies and Thermo Fischer said they would be moving jobs to Reynosa, Mexico.

Yet, since Walker's budget was enacted on July 1, 2011, Wisconsin has lost jobs for six straight months, a dismal record that is unmatched by any other state.

The business climate strategy is based on the false assumption that marginal cuts in business costs drive investment and job creation.

But businesses don't invest or create jobs because state government cuts marginal tax rates or eliminates regulations. Firms invest and hire in response to increased demand for their products or services. Or, like Frontier, they cutback when they lose market share.

The Walker administration, by enacting an austerity budget that reduces wages and public employment, has caused demand to decline in Wisconsin. As a result, Wisconsin has lost jobs for six straight months even as the national economy has added  3.7 million payroll jobs over the last twenty-three months.

Walker's draconian cuts to local government and to public schools ($1.2 billion), technical colleges (30%) and the university system ($250 million) have reduced public employment as workers are laid off and positions go unfilled.

Last year Wisconsin lost a higher percentage of its state government employees than any other state, according to the federal Bureau of Labor Statistics. As public employment declines as a  result of layoffs and retirements, discretionary income and demand have also declined.

The Federal Reserve of Philadelphia released the leading indexes for the 50 states for December 2011. The indexes are a six-month forecast. Forty-four state coincident indexes are projected to grow over the next six months, while only six including Wisconsin are projected to decrease. 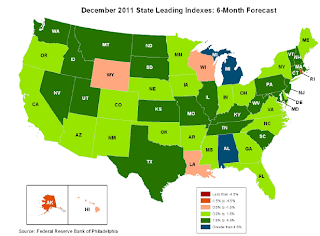 Wisconsin's job losses and economic trajectory stand in sharp contrast to the national economy that created 225,000 jobs last month alone. This graph from Econbrowser demonstrates how poorly Wisconsin compares to the U.S economy. 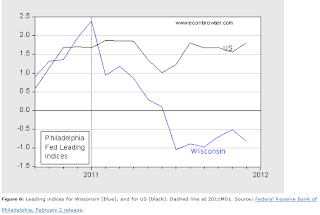 Wisconsin Governor Walker based his campaign for Governor on a promise to create 250,000 private sector jobs.

Walker's policies are not working.
Posted by Michael Rosen at 6:30 AM 10 comments:

The truth about Union Facts and its corporate sponsors

Posted by Michael Rosen at 8:19 AM No comments:

What did Walker know? And when did he Know it?

California to close for-profit colleges including many Everest College campuses

Nearly half of the for-profit colleges in California, including Everest College which opened a campus one block away from Milwaukee Area Technical College in the fall, are being kicked out of a state student aid program because of their default rates, The San Francisco Chronicle reported.

A little-known California law will bar nearly half of the for-profit college campuses in the state from offering students a coveted Cal Grant this year.

The law cracks down for the first time on schools with high student loan default rates, meaning graduates aren't paying back the money they owe even three years after leaving school. 25% of the schools being shiut down are owned by Corinthian College, Inc. which operates Everest College.

"It's a sign that the institution did not prepare them for a job so they could repay their loan," said Robert Shireman, who, as deputy undersecretary of education in the Obama administration, oversaw reforms in student lending.

No public campuses are affected by the law, SB70, because none has the toxic combination of a high percentage of borrowers where at least 1 in 4 defaults.

But 40 percent of California's "private Career colleges" do. Of 165 such campuses in the state, 67 have three-year default rates of at least 24.6 percent, the legal cutoff.

They include some or all campuses of popular colleges many of which have campuses in Milwaukee: Everest, Carrington (formerly Western Career College), Kaplan, ITT Technical Institute, WyoTech, Heald and more.

"I'm mad. This pretty much ruined my credit," said Rigo Herrera, who owes $37,000 on a $27,000 federal loan he took out for a pre-nursing program at Everest College in Alhambra (Los Angeles County). He graduated from the 12-month program in 2008 but said he didn't learn enough to pass the license test and get a job.

"If they're getting punished, that makes me happy," said Herrera, who is in default.

The new law is supposed to punish such schools by depriving them of students who get Cal Grants.

"It's about getting their house in order, aiming them away from overaggressive promises they can't keep," Shireman said.

Students at for-profit colleges get about $4,000 to $10,000 in state aid on average, depending on the type of grant. When SB70 took effect this fall, about 4,900 students applying to for-profit colleges suddenly became ineligible or were offered a partial grant if they were already enrolled, according to the California Student Aid Commission.

The commission doesn't know what happened to most students at the affected schools but says at least 597 switched schools or withdrew.

Corinthian Colleges owns more than one-fourth of the schools booted from the Cal Grant program.

All 14 of its Everest Colleges - including those in San Francisco, Hayward and San Jose - were barred. Depending on the campus, 30 to 45 percent of borrowers are in default. Not everyone at Everest applies for a Cal Grant, mainly because some programs last just 10 months. But about 320 students were eligible to receive a total of $756,000 last year.

Corinthian also owns nine Heald Colleges. Those in Fresno and Stockton had default rates high enough to cost them their Cal Grants. More than 1,300 students at the two campuses were eligible to receive $6.2 million last year.

Corinthian's WyoTech campuses in Fremont and Long Beach were also kicked out of Cal Grants. There, 122 students were eligible to receive $186,000 in state aid last year.

Company spokesman Kent Jenkins downplayed the Cal Grant loss, calling its impact muted.
"At the same time, we recognized that Corinthian's default prevention programs were not adequate," he said.

So the company "invested tens of millions of dollars" to reduce default rates, Jenkins said. It bought technology to keep track of graduates and hired staff to better communicate with students about their financial obligations.

Three campuses that lost access to the Cal Grants are owned by ITT Educational Services, in which University of California Regent Dick Blum is an investor. His firm, Blum Capital Partners, invested almost $239 million as of September.

For-profits aren't the only schools to lose access to Cal Grants. Nine nonprofit private colleges also lost them, including Patten University, a Christian school in Oakland.

Nanette Asimov is a Chronicle staff writer of this story. nasimov@sfchronicle.com