By THE ASSOCIATED PRESS
MADISON, Wis. (AP) — A prosecutor asked the Wisconsin Supreme Court on Friday to reopen his lawsuit challenging Gov. Scott Walker's contentious collective bargaining law, contending a justice who voted to dismiss the suit earlier this year got free legal help from the firm defending the law.

Dane County District Attorney Ismael Ozanne argued in filings with the court that it should vacate its earlier decision, reconsider the case and disqualify Justice Michael Gableman from participating if he won't recuse himself.

"Reasonable, well-informed people would reasonably question Justice Gableman's ability to be impartial under the facts presented here," Ozanne wrote. "Respectfully, any litigant in any case deserves to have his case heard by a judge who has not secretly received a valuable gift from the other side's lawyer."

Walker's spokesman, Cullen Werwie, issued a one-sentence response by email late Friday afternoon, saying only that "we are confident the Supreme Court got it right the first time."

Ozanne initially filed the lawsuit in March, alleging Republican lawmakers violated open meetings laws when they convened a committee to revise the collective bargaining measure without proper public notice. The meeting came during the height of massive around-the-clock protests at the Capitol against the legislation, which eliminated most public workers' union rights.

Gableman had retained the Michael Best and Friedrich firm to defend him in a 2008 ethics case stemming from one of his campaign ads. The ad accused his opponent, then-incumbent Justice Louis Butler, of finding a loophole for a sex offender who went on to molest another child. It didn't mention that Butler failed to get the offender out of prison early and that the offender committed the new crime after he had served his sentence.

Word surfaced earlier this month that Gableman signed a contingency agreement with the law firm that called for him to pay attorneys' fees only if he prevailed in the case, much like promises injury lawyers make to clients not to collect payment unless they win the case. The Supreme Court ultimately deadlocked 3-3 on whether the ad violated the ethics code, which meant he didn't lose or win the case and didn't have to pay the firm's attorneys for their services.

Where are the jobs?

Not in Wisconsin, according to this map by the Federal Reserve Bank of Philadelphia which illustrates U.S. economic growth from July 1, 2011 when Governor Walker's austerity budget went into effect, to October 1, 2011.

Guess which state has dropped to the bottom? That's right.......Walker's Wisconsin!

Wisconsin trails the national economy because the Wisconsin Republican Party's “cuts only” budget sucked billions of dollars of demand out of the state economy.


When workers are laid off or their incomes decline, they reduce their spending. And when consumers stop spending, businesses don't invest.  Instead, they lay-off  employees and reduce their own spending. A vicious downward cycle unfolds.

This is exactly what has happened in Wisconsin

Wisconsin's economy is struggling because of a lack of demand. The Republican Party's response has been to reduce public demand. The result - Wisconsin, which has lost jobs for the last 5 months, is dead last among 50 states in economic performance. 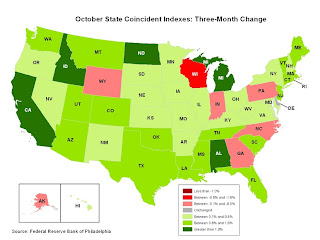 Where are the jobs? Not in Walker's Wisconsin.

Over the past three years, lawmakers on the House Oversight and Government Reform committee have investigated bonuses and executive pay at companies that benefited from billions in taxpayer dollars: Fannie Mae, Freddie Mac, AIG and others bailed out after the 2008 financial crisis.

Now, Democrats on the committee have turned their attention to another industry whose fortunes are closely tied to federal money: for-profit colleges.

Rep. Elijah Cummings (D-Md.), the ranking member on the House oversight committee, has requested executive compensation information this week from 13 Wall Street corporations that own for-profit colleges. According to letters he sent to the companies' executives Monday, Cummings is seeking information on how what he termed "lavish" executive pay at college corporations is tied to the quality of education and student performance at such schools.

"When compared to public and non-profit schools, for-profit companies spend a smaller percentage of their funds on student education, reserving more for marketing, advertising, recruitment and other non education expenses," Cummings said. "Their student success rates are lower, and their students are more likely to default on loans. But their CEOs consistently make much more than their counterparts at public and non-profit schools."

Brian Moran, head of the Association of Private Sector Colleges and Universities, a trade group representing for-profit colleges, called Cummings' announcement "more politics." He argued in a statement that the investigation "fails to acknowledge the important role private sector colleges and universities have in educating non-traditional students to compete for jobs in a very difficult economic environment."

"Rather than singling out one sector, we hope that Representative Cummings evaluates all areas of higher education so that the true beneficiary is the student," read the statement from Moran, interim chief executive and president of the group.

Including salary, bonuses and stock options, the majority of chief executive officers at the 13 companies received more than $3 million each in compensation, according to Cummings' office and securities filings from the companies. The top executives at DeVry Inc., ITT Educational Services Inc. and the Apollo Group Inc., which owns the University of Phoenix, all received more than $6 million, according to the most recent securities filings detailing executive pay.

By contrast, the president of Harvard University, Drew Gilpin Faust, received a base pay of $714,000, and a total estimated compensation of $874,000, according to federal tax documents from the non-profit institution.

Several of the largest publicly-traded companies owning for-profit colleges receive more than 80 percent of their revenues from government student aid dollars such as Pell Grants and federal student loans. Over the past year, the Obama administration has stepped in with stricter accountability rules aimed at protecting billions of dollars in federal subsidies going to for-profit higher education.

Statistics from the Department of Education show that for-profit schools on average spend less than a third of what public universities spend on student instruction, despite high price tags for tuition. Students at for-profit colleges are responsible for an outsized share of student loan defaults: although about 12 percent of college students nationwide attend for-profit schools, the sector is responsible for more than 45 percent of federal loan defaults.

In letters to the 13 executives, Cummings wrote that he was requesting the agreements on corporate compensation "as part of an effort to determine whether your salary, bonuses and other compensation are appropriately tied to the performance of the students you educate, the vast majority of which pay for their education with federal tax dollars."

The Apollo Group noted in a filing Tuesday that a "substantial portion" of what Cummings requested was in public documents filed with the Securities and Exchange Commission, but said the company intends to "cooperate fully with Rep. Cummings to provide any necessary additional information."

A spokeswoman for Rep. Darrell Issa (R-Calif.), the chairman of the House oversight committee, did not respond to requests for comment Tuesday.

Cummings asked for the "full, unredacted copies of compensation agreements" by Dec. 23.

Last month the House oversight committee held a hearing on executive pay at Fannie Mae and Freddie Mac, the quasi-governmental mortgage giants that were rescued by the government in 2008 as the housing market collapsed. In 2009, the committee also held hearings on executive pay at major firms that received government bailout money, including American International Group Inc., Citigroup, Bank of America, Chrysler and General Motors.

Posted by Michael Rosen at 8:22 AM No comments:

Central Wisconsin not open for business

Jim Rowen repoirts in his blog, The Political Environment:

Unbelievably, a business making doors and windows said today it is closing in Mosinee - - where Wausau Paper is headquartered - - and the job impact, without the indirect effect, is put at 566.

Is Central Wisconsin open for business?

Posted by Michael Rosen at 3:51 AM No comments:


"When the state budget passed in Madison, a lot of us thought we might lose our jobs. We figured if we didn't get laid off, our class sizes would become unmanageable. But that, didn't happen."

This, according to Knutson's boss,  Monona Grove superintendent Craig Gerlach, is simply false.  Like nearly all school districts in Wisconsin, Monona Grove has been forced to lay-off teachers and has experienced increases in class sizes:


"The numbers at Monona Grove clearly don't work.  We struggled to put together a budget this year, we made significant cuts in terms of programs, laid-off teachers... we closed a building.  Next year, quite frankly, will be brutal."