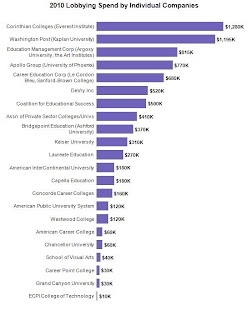 The entire article is linked here.
Posted by Michael Rosen at 11:08 AM

If you are interested corporations spend many times more money than unions on lobbying and in elections. Of the ten largest contributors to national elections seven are corporate and only three union.

Anonymous. Here are some facts on corporate vs labor participation in electoral politics during the period when American politics began its dramatic shift anti-work shift. In 1976 there were 224 labor PACs, a number that would modestly increase to 261 a decade later. Over the same period corporate and trade PACs increased from 922 to 2,182. Throughout the decade corporate and trade PACs outspent labor by by between two and three to one. Between 1968 and 1978 corporate office in DC grew from 100 to 500. IN 1971 only 175 coporations had registered lobbyists in DC, by 1982 nearly 2,500 did.the number of Corporate PACs increased from about 300 in 1976 to over 1,200 by the middle of the '80s. You are wrong that corporations are taking a page out of labor's handbook. Rather corporation have written the handbook on how to buy and sell political influence.