The Journal Sentinel is wrong-the U.S. is not Greece 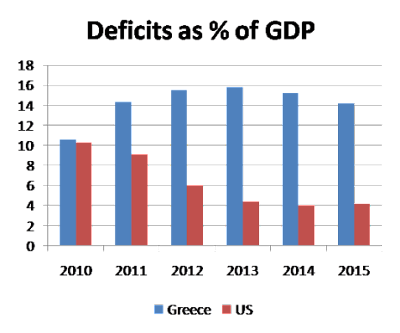 In a recent editorial the MJS editors implied that America’s deficit problems were caused by the same “out-of-control spending on government programs for aging populations”as Greece's. Social Security, Medicare and Medicaid were specifically cited. “Take heed” warned the state’s largest daily as it called for “new austerity” measures, presumably including cutting Social Security, Medicaid and Medicare.

Before we begin slashing our senior citizens' hard earned benefits we ought to take a closer look at the facts. As Noble Prize winning economist Paul Krugman wrote:

The truth, however, is that America isn’t Greece — and, in any case, the message from Greece isn’t what these people would have you believe.

So, how do America and Greece compare?

Both nations have lately been running large budget deficits, roughly comparable as a percentage of G.D.P. Markets, however, treat them very differently: The interest rate on Greek government bonds is more than twice the rate on U.S. bonds, because investors see a high risk that Greece will eventually default on its debt, while seeing virtually no risk that America will do the same. Why?

One answer is that we have a much lower level of debt — the amount we already owe, as opposed to new borrowing — relative to G.D.P. True, our debt should have been even lower. We’d be better positioned to deal with the current emergency if so much money hadn’t been squandered on tax cuts for the rich and an unfunded war. But we still entered the crisis in much better shape than the Greeks.

Even more important, however, is the fact that we have a clear path to economic recovery, while Greece doesn’t.

The U.S. economy has been growing since last summer, thanks to fiscal stimulus and expansionary policies by the Federal Reserve. I wish that growth were faster; still, it’s finally producing job gains — and it’s also showing up in revenues. Right now we’re on track to match Congressional Budget Office projections of a substantial rise in tax receipts. Put those projections together with the Obama administration’s policies, and they imply a sharp fall in the budget deficit over the next few years.

Greece, on the other hand, is caught in a trap. During the good years, when capital was flooding in, Greek costs and prices got far out of line with the rest of Europe. If Greece still had its own currency, it could restore competitiveness through devaluation. But since it doesn’t, and since leaving the euro is still considered unthinkable, Greece faces years of grinding deflation and low or zero economic growth. So the only way to reduce deficits is through savage budget cuts, and investors are skeptical about whether those cuts will actually happen.

It’s worth noting, by the way, that Britain — which is in worse fiscal shape than we are, but which, unlike Greece, hasn’t adopted the euro — remains able to borrow at fairly low interest rates. Having your own currency, it seems, makes a big difference.

In short, we’re not Greece. We may currently be running deficits of comparable size, but our economic position — and, as a result, our fiscal outlook — is vastly better.

That said, we do have a long-run budget problem. But what’s the root of that problem? “We demand more than we’re willing to pay for,” is the usual line. Yet that line is deeply misleading.

First of all, who is this “we” of whom people speak? Bear in mind that the drive to cut taxes largely benefited a small minority of Americans: 39 percent of the benefits of making the Bush tax cuts permanent would go to the richest 1 percent of the population.

And bear in mind, also, that taxes have lagged behind spending partly thanks to a deliberate political strategy, that of “starve the beast”: conservatives have deliberately deprived the government of revenue in an attempt to force the spending cuts they now insist are necessary.

Meanwhile, when you look under the hood of those troubling long-run budget projections, you discover that they’re not driven by some generalized problem of overspending. Instead, they largely reflect just one thing: the assumption that health care costs will rise in the future as they have in the past. This tells us that the key to our fiscal future is improving the efficiency of our health care system — which is, you may recall, something the Obama administration has been trying to do, even as many of the same people now warning about the evils of deficits cried “Death panels!”

So here’s the reality: America’s fiscal outlook over the next few years isn’t bad. We do have a serious long-run budget problem, which will have to be resolved with a combination of health care reform and other measures, probably including a moderate rise in taxes. But we should ignore those who pretend to be concerned with fiscal responsibility, but whose real goal is to dismantle the welfare state — and are trying to use crises elsewhere to frighten us into giving them what they want.

Posted by Michael Rosen at 8:25 AM