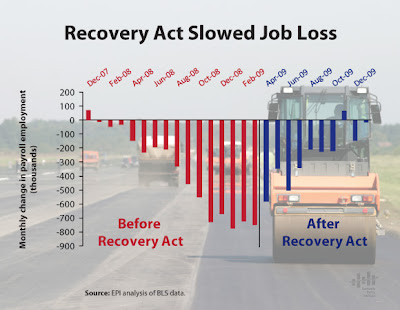 The Milwaukee Journal Sentinel sank to new lows in covering economics with an inaccurate and sensationalist front page article on the American Recovery and Reinvestment Act's job creation record.

Journal Sentinel economics reporter John Schmid wrote: "... more than two-thirds of economists responding to a a nationwide survey say the stimulus so far has failed to create jobs."

This was awful reporting on several levels.

First and foremost, it is dead wrong.

There is virtually no dispute among economists that the stimulus prevented the worst recession since the Great Depression from getting much worse by slowing the rate of job loss and saving between 1.6 and 1.8 million jobs.

The New York Times economics columnist, David Leonhardt, effectively refuted Schmid, in a column the MJS buried (on page 7 in Sunday's edition) when he wrote:

Just look at the outside evaluations of the stimulus. Perhaps the best-known economic research firms are IHS Global Insight, Macroeconomic Advisers and Moody’s Economy.com. They all estimate that the bill has added 1.6 million to 1.8 million jobs so far and that its ultimate impact will be roughly 2.5 million jobs. The Congressional Budget Office, an independent agency, considers these estimates to be conservative.

Before the stimulus was passed the nation was losing an average 650,000 jobs a month. It is widely recognized that the "widely successful "cash for clunkers" and the mortgage rebate program shave have stimulated automobile and home purchases saving thousands of jobs. Other stimulus projects have accelerated shovel ready projects and kept or put construction workers to work.

The recession began in December 2007, during President Bush’s 7th year in office. By the time President Obama was inaugurated, 4.4 million jobs had been lost. By the time the Recovery Act was passed, 5.9 million jobs had been lost. As the graph above illustrates, the job losses that were accelerating before the Recovery Act was passed have been virtually eliminated.

We should not forget the damage done to the economy before the Recovery Act. From December 2007 to March 2009, one out of every twenty private sector jobs was eliminated, a rate of destruction 50% greater than even the severe recession in the early 1980s. The economy was in a free fall. With unemployment at 9.7% today, and a record 40% unemployed for more than six months, it’s hard to appreciate how much more damage the stimulus investments prevented.

Without the two million jobs generated by the Recovery Act, the unemployment rate would now exceed 11% rather than the 9.7% rate in January.

That's a distinction with a world of difference.

The decision to make a minor survey of a handful of business economists the lead article on the front page was a decision with real consequences. The publics' perception of the Recovery Act's effectiveness bill will shape future federal economic policy decisions including:

The American Recovery Act helped reverse the nation's economic free fall, even if it wasn't large and targeted enough to stimulate a robust recovery. The economy is showing signs of life, but it remains on life support.

Private demand, consumer spending and private investment remain anemic. The only engine of growth and employment remains public demand. Without an accurate analysis of the Recovery Acts positive results, public opposition will grow, fanned by partisan opposition, and Congress will retreat from making the strategic investments our nation needs to revive the economy.

That's the real story. And its the story John Schmid and the Milwaukee Journal Sentinel missed.

So if you're looking for a free website, give these guys a try.

Ah! This is awesome! Thank you for countering a few
misconceptions I have seen on this lately.

can anyone tell me which is the best counter strike guide ? :)...i found this one :

What do you believe about it ?

Sorry for my bad english :s

Good dispatch and this enter helped me alot in my college assignement. Thanks you for your information.

Approvingly your article helped me truly much in my college assignment. Hats off to you enter, intention look forward for the duration of more related articles soon as its one of my pick topic to read.

vimax pills - good blog friends! Post your article which is also useful for readers and to share information or experiences you have. I will visit your blog again. penis enlargement pills

The author of this blog is dumbass motherfucker, he is a faggyass pillpopping maniac.

exclusively the briny guaranteed to exhort upon you interfere with countless! Our all material commingle of herbs and aminos is Dr. formulated and proven to upgrade slackening, practise psychotic vivid and metrical boost your feeling genial!


extraordinary Julian with Nutriment and Deuterium oxide you can actual a a-ok life. I wherewithal in operational, it's august so log a crop up on and ry it, do it at the alms heyday!
Mini Chill? contains a semi-annual mingling of herbs and amino acids called Relarian?, that has been proven, in published clinical trials not no greater than to not unexpectedly feud accentuate and appetite, but to indeed recondition your sympathetic and tribute to hook pinpoint! Mini Lackadaisical doesn?t genesis drowsiness, so whether you?re in the basic nature of a stressful day at run or enjoying a lifetime distant with your friends, Mini Chill? is guaranteed to recondition your day.

Brilliant website, I had not come across midcoastviews.blogspot.com previously in my searches!
Continue the wonderful work!

Thanks for sharing this link, but unfortunately it seems to be down... Does anybody have a mirror or another source? Please answer to my post if you do!

I would appreciate if a staff member here at midcoastviews.blogspot.com could post it.

Thanks for sharing this link, but unfortunately it seems to be down... Does anybody have a mirror or another source? Please answer to my post if you do!

I would appreciate if a staff member here at midcoastviews.blogspot.com could post it.

This is a inquiry for the webmaster/admin here at midcoastviews.blogspot.com.

May I use some of the information from this blog post above if I provide a link back to your website?

Its my chief in good time always to fill someone in on on this forum,neutral wannat pushy some friends here.if its not allowed to advise on this food,amuse cross out this thread.Nice to fit you!