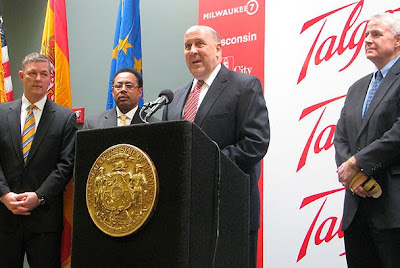 Talgo Inc., the Spanish train manufacturer that recently established operations in Milwaukee, has sent a letter to Milwaukee's corporate spokesmen seeking their assistance in persuading Governor-elect Walker to reverse his decision to return an $810 million federal high speed rail grant. The investment is projected to create 13,700 jobs in Wisconsin.

Talgo selected Milwaukee's former Tower Automotive site to house its U.S. manufacturing facility because Wisconsin was the first state to order trains from the firm.

The letter asks Tim Sheehy, the Executive Director of the Metropolitan Milwaukee Association of Commerce (MMAC) and Jim Paetsch, who directs corporate relocation for the Milwaukee 7, to speak to the Governor elect on behalf of Talgo and other suppliers related to the project.

Don't hold your breath waiting for Mr. Sheehy to help.

Not only did Sheehy's organization contribute $381,500 to Walker's gubernatorial campaign , but Sheehy has already said he will not use any chips protecting Talgo's investment in Wisconsin. "Why beat a dead train," Sheehy told the MJS. His focus is on ensuring that Walker cuts taxes.

The MMAC and its Executive Director were more than willing to take credit for Talgo when Governor Doyle announced the company was coming to Milwaukee. ""We're Not Just in the Game - We're Winning!" read an announcement from the MMAC. Sheehy bragged that the M-7 was attracting new industries despite some of the gloomiest economic conditions in decades and claimed that Talgo's decision to locate in Milwaukee would help attract additional manufacturing firms to the city. Sheehy, standing to Governor Doyle's far left in the photo above, teased that a third deal with an unnamed firm was in the works.

But as recent events demonstrate the the only thing that really matters to Mr. Sheehy and the MMAC is cutting corporate taxes, despite the fact that corporate profits are the highest they have every been and Wisconsin's business taxes are among the nation's lowest.

Don't hold your breath waiting for Mr. Sheehy to use any chips for Talgo or Milwaukee's unemployed. As long as Walker delivers corporate cut taxes, Sheehy will remain silent.
Posted by Michael Rosen at 7:24 PM