Walker sacrifices Milwaukee on the altar of a failed ideology 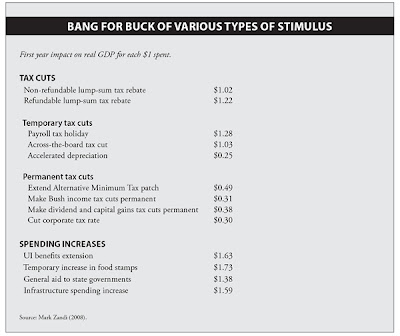 And what about the community's growing number of unemployed workers. Milwaukee has lost 6,000 jobs this year. Black male unemployment is the second highest in the nation. The city's official unemployment rate stands at 7.7%. The real rate including those who have dropped out of the labor market and those working involuntarily part-time is almost 13%. We have the 7th highest poverty rate in the nation. Yet, Walker intends to turn down proposed federal investments in the community that will help repair the failing infrastructure and create jobs.

The investments that Walker opposes are effective job creators, much more effective than the tax cuts than Walker says he would consider supporting.

I have attached a chart based on data complied by Mark Zandi, a former economic advisor to Senator John McCain, that show that tax cuts are an ineffective form of stimulus compared to alternatives such as extending unemployment benefits, increasing food stamp allocations or investing in the infrastructure.
We've been down the Walker tax cut road before and it leads to nowhere.

A year ago, as layoffs increased and output declined, it was clear that monetary policy, the manipulation of the money supply to promote economic growth with price and employment stability, was not enough to end the recession. Unfortunately, President Bush and congressional Republicans refused to consider any form of economic stimulus except tax cuts. They even refused to support an extension of unemployment benefits for workers who had exhausted their 26 weeks of unemployment compensation despite the rapid increase in the ranks of the long-term unemployed. They stubbornly refused to support any increases in federal spending because it did not fit their narrow ideology.

So the first stimulus package was limited to $152 billion worth of tax cuts. It failed to jump start the economy because instead of spending their tax cuts, people saved 80% of it. Today consumer and business owner confidence is even lower. When consumers and business owners are concerned about the future they do not consume or invest. This is why cutting taxes as the
Zandi chart indicates are among the least effective form of stimulus.

Economists have labeled this the paradox of thrift and it was first identified by John Maynard Keynes, the noted English economist. Established economic theory assumes that the pursuit of self interest will be good for the entire economy. But when the economy is doing poorly, people save for a rainy day. While this may be personally rational, it is irrational for the economy as a whole which needs increased aggregate spending to grow.

The economy has lost 2.6 million jobs in the last year and more than a million in the last two months. Milwaukeans are hurting and the County is falling apart.

County Executive Walker's stubborn refusal to recognize these dire circumstances and the need for immediate action has nothing to do with principles. It is the type of reckless zealotry that sacrifices the lives and well being of millions on the altar of a failed ideology.

Posted by Michael Rosen at 8:20 AM

Here are some other thoughts for consideration:

1) Wisconsin has historically received a lower amount of federal dollars than other states. This is primarily because of our lack of military bases in Wisconsin. However, Walker's actions compound the problem by giving federal funders an excuse to by-pass Wisconsin in favor of funding other states. Walker's actions beg the question "Why fund Wisconsin when they do not want the dollars?"

2) Hopefully, Walker's actions will only hurt Milwaukee County and not the remainder of the state. It is my hope that Wisconsin's other 71 counties will be able to pick-up Milwaukee County's share of the stimulus package rather than having these funds leave Wisconsin entirely - but that is a strong possibility, further eroding Wisconsin’s economic and political standing in the nation.

4) Walker's actions may hurt Milwaukee for many years to come. Federal funders have a very long memory and it will be doubtful that these funders will offer Milwaukee County and opportunity for further funds remembering how they were snubbed by Walker. It will take many years to rebuild the county-federal relationships.

5) If I was a Mayor of another Wisconsin municipality (and I have been) I would be working like crazy right now to capture a portion of Milwaukee County’s share of stimulus package. Walker’s statement’s give a green light to any savvy politician seeking to increase federal funding, thereby reducing the local property tax burden.

For what it is worth…